​I did some studying during the summer to analyse where I had been with the car and was just basically jotting things down: This is what the car wants, so this is how I’ve gotta drive it. Then I did just that consistently throughout the season.

Knowing what not to do is often more important than knowing what to do.

We don't have enough time to do all the things we want to do. So we need to be selective.

Prioritising is what the best drivers and coaches do. They look at everything that could be improved and then decide which are the most important, which will provide the biggest improvement.

Many drivers are reluctant to take the time to learn the basics. I don’t know if they think they know better, that they are above and beyond that, or what? Or maybe they just don’t want to put the effort into it – they’re looking for the quick fix/trick? Or maybe there’s another reason that I’m unaware of. What I do know is that they’re missing out on the important stuff.

Nobody would want to fly on a plane being flown by a pilot who hasn’t learned the basics, no matter how many advanced manoeuvres they knew how to perform.

The more I learn as a driver and coach the more I realise how critical the basics are. In fact I am convinced there are no advanced techniques. They’re simply very well refined basics.

Take trail braking. I know it’s not a super-advanced technique, but for some drivers it is. One technique that separates the very best drivers in the world from the rest is how they release the brakes while entering a corner. It’s the timing and rate of release of the brakes. That IS trail braking. Whether the brakes are released one inch after turning in or at the apex of the corner.

Really it’s basic stuff. What trail braking is when looked at in the simplest way, is a relatively slow smooth release of the brake pedal. And that’s about as basic as it gets. Nothing trick there! You can think of it this way – the advanced technique of trail braking is just doing the basics of releasing the brakes smoothly, but very very well.

One of the big differences between the best and less than best drivers is how they go about prioritising. At track day events I see driver after driver focusing on some super-trick advanced technique when fine tuning something more basic would yield a better result. When coaching higher level drivers I often see the opposite – drivers focused on the fine detail of the basics.

This past year I attended about 100 track events and I worked with a few hundred drivers in some way. A surprising number of these drivers were either attempting to left foot brake for the first time or were practicing it and there were quite a few who were asking me whether they should left foot brake or not. You know what I am going to say now – get the basics right first.

In the grand scheme of things I’d consider left foot braking an advanced technique. Many young drivers come directly from karts into cars and there are drivers who have cars equipped with paddle shift gearboxes that don’t require the use of a clutch but these are a small minority still so not part of our conversation here.

When I observe these drivers either from the left seat, from the side of the track, from in-car video, through data, or through the process of debriefing – I know that left foot braking is far the high priority for their improvement. But that’s what they’re working on instead of some more important but basic technique or skill that would make a bigger difference to their driving performance.

So how about you? What are the highest priorities for you in terms of improving your driving? List out all of the things you could improve. Even if it's something you’re quite good at but could still improve just a little bit more. Take some time to do this and write it out. My next article will help you do this.

When making this list consider both your physical and mental skills and techniques. And even what things you could improve when outside of the car.

So, which of these techniques or skills would make the biggest difference to your driving performance? Which would make you faster, more consistent, more successful, the most fun?

While going through this process don’t assume that an advanced technique or skill will result in a bigger performance gain than a well done basic one just because it sounds sexier! Be brutally honest as it is often simple things that can be holding you back.

Prioritise your list. What are the three most important techniques or skills that if you were to improve them would result in you being consistently better.

​Read Part 2
​Back to Driving Notes 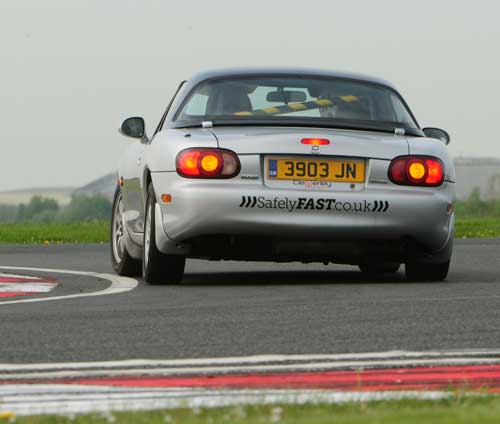